What is a degree actually worth? 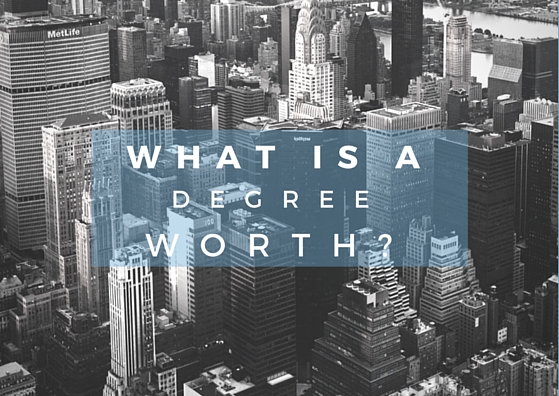 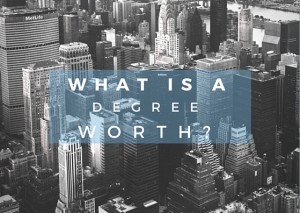 I’m going to write this as un-biased as I can given my lack of a degree and stopping full time eduction at 18. However following leaving my previous company in February 2016 and looking for new opportunities – the question of What is a degree worth has come very to the forefront of my thinking.

Now I’m going to park some of this topic now with taking out the sectors where a degree is a MUST. We wouldn’t want to see a Doctor or a Lawyer who had just “learned through life” those jobs need training, degree’s and further continual training. However beyond those area’s just how much importance can we put onto having a degree?

The cost of having a degree is about £9k a year now, plus of course those good old living expenses. So really for 3 years of study your looking at £40k of costs. Against a private school fee’s of £20k+ a year that’s probably good value – but for the “average Jo” what are you going to get out of it?

This article by an Oxford University Bursar believes that actually most people will never be able to pay back the loan that they take out to study. So why go through it?

I left school at 18 and went into work. I’ve learned through the school of life and the last 18 years have taught me a lot! Even the 3 years whilst my peers were studying I learned about life, my industry, growing up….

However what bugs me and my reason for this post is what now is a degree worth to employers? I’ve been looking around at a number of positions to open my options up but 3 or 4 of the jobs that I have found have said you must be degree educated. Nothing specific what that degree actually is – but you must have a degree. Now given these roles are on the whole more “senior” within companies I can understand it on one hand that it show’s a level of study – but why should I (and others like me) be discriminated for jobs?

I could have a 3rd in French from London Met university (ranked the lowest in 126 UK university) spent every night off my face drunk, somehow scraped through the final exams and ended up with that result. Why should that person get through the application process for something (given the roles in question) was probably 15+ years ago (and also nothing to do with the now job) rather than someone who’s run business and decided vocational training was better?

Don’t get me wrong once past age 22-24 (your average Uni leaving age) you should compare like for like CV wise but is the average Jo more deserving or a harder worker just because he has his 3rd in French? Probably not…

As I said at the start I’m trying not to be biased one way or other. I know of people who’ve worked hard, got the first and walked into a great job because of it but especially with the cost of degree’s nowadays what’s the point in saying you have to have a degree for this job – when 80% of the time it really doesn’t matter…